I mentioned in an earlier post how appreciative I am of the Virginia Beach Central Library and the staff there. Early in my research I asked them for any information they had on Edward Herbert and Level Green Plantation. They produced several newspaper articles, some family tree info and also several old photographs of a house. There was a hand-written note in pencil next to one of the photos that simply said; 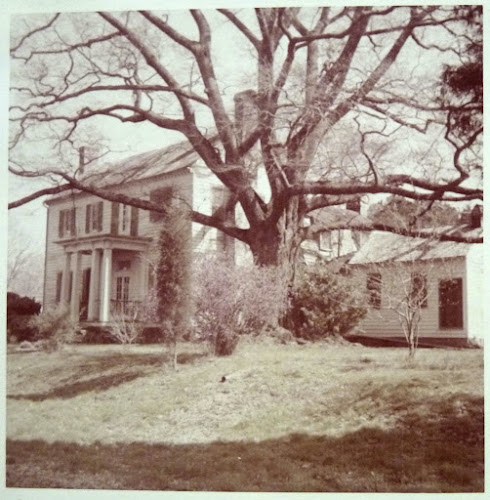 Other photos of the same house were similarly labelled, "Herbert house" with no additional information on where the house was located, when it was built, or when the photos were taken. This, of course, fired up the history detective in me: I had to learn more about this mystery house.
The house most often associated with the Herbert Family is probably Sunnyside, formerly located at 301 Riverton Point (the 19th century house was demolished in 1990). Sunnyside remained in the Herbert family for over 150 years, and was featured in a tour of historic homes in Virginia Beach.  However, a quick glance at the two homes shows that the mystery house is not Sunnyside.
Sunnyside probably wasn't the plantation house for Level Green anyway. Level Green was established in 1833, south of "the main road leading from Norfolk to Kempsville" (Providence Road). Edward Herbert didn't purchase the land around Sunnyside Drive until 1850. Edward's son, Arthur Herbert purchased several tracts of his father's land in 1882, including 100 acres "... of Level Green estate, on which all buildings stood" south of the Indian River Turnpike (Princess Anne County Deed Book 56, page 80). That particular parcel remained farm land until the early 1970's, so satellite imagery from historicaerials.com proved helpful here. The 1963 imagery shows a plantation-style arrangement of a few structures and several large trees surrounded by farm land immediately west of what is now the intersection of Tradewinds Drive and Level Green Blvd.
The structures were located at the end of a lane that began at the intersection of Providence and Indian River Roads. I will mention here that while Indian River Road was not constructed until after the Civil War, Providence Road did exist in 1833.
I found the most recent piece of evidence while on a date night with my wife, Robby. Flipping through pages at the Barnes & Noble in Town Center, I was surprised by a photo in the book, Virginia Beach (Then & Now) by Amy Hayes Castleberry. In the chapter "Eastern Branch, Kempsville and Newtown" there is a photo of a house that is all-but-identical to the house in the mystery photo. The house is identified as "Level Green".
The quality of the satellite imagery is not good enough to compare to the house photos to confirm a match, so I wouldn't say that my research is conclusive; however, all of the evidence that I do have suggests that the house in the picture is, in fact, the Level Green plantation house, probably constructed some time around 1833 after Edward Herbert purchased that land; located at what is now the intersection of Tradewinds Drive and Level Green Blvd. According to USGS maps on historicaerials.com, the plantation house probably survived right up until the construction of the Level Green neighborhood in the early-to-mid 1970's. Perhaps someone who has lived in this area longer than I have can offer some insight?

Posted with Blogsy
Posted by Garrett Rockey at 9:03 AM