I am happy to count Hannah Fentress as one of my neighbors.  Hannah's husband Joseph moved to Woodstock in 1952, having purchased the house and property that is today 604-612 Woodstock Road.  Hannah and Joseph married after the death of his first wife, Emily (d. 1965) and Hannah remained a Woodstock resident until she died in 2001 at the age of 91.

If you think it odd that I consider a woman who died 10 years before I moved here a neighbor, then I beg your favor in this matter.  Woodstock is defined not only by the present, but also the past; and there are neighbors still living here that remember Hannah.  We both traveled along the same road, and I wonder if someday my road will lead to where she is.

I don't know why Hannah wrote this short biography less than two years before her death in 2001, but it fills me with awe to think that I know neighbors who knew Hannah -- who recalls leaving her birthplace in a covered wagon.

Thanks to Mark Robison who sent me this document and photo back in 2013. 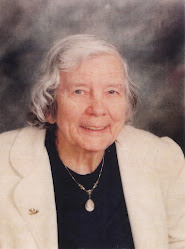 History of my Life

We left Portland in 1911 in a covered wagon. Not many people had cars then. We went to Illinois by train in 1915. My Mother's people lived there. Her sister took us someplace where we sat on a bank. I was five years old and I thought that it was the end of the world. The fifth child was born there. We went to Charlotte, N.C. in 1920 to see my Father's family. In 1920 my brother was born. We were living at Camp Green. We had a well there and the soldiers would stop and get a drink of water. There was a persimmon tree by. They were nice and rosy cheeks but by no means ripe. They looked tempting. I don't know how many soldiers tried them but some did. They got a very bitter mouthful as they are supposed to be soft and brown.

We came to Ocean View, Norfolk. We purchased property and put up a tent my Father built sides to, and finally had nice house. We moved several times but finally settled in Glenrock where we built and I married in 1929.

I went to work for the City Manager of Norfolk as a cook. They found out that I was going to get married and asked us to go to their Summer House in Accomack County.

We bought 100 chicks right away. The first night the rats got half of them. The next night they got the rest. That was the end of our chicken business. They had a yacht and paid my husband to take them out in it. They had oyster floats where the crabs shed their shells. They had clams and fishes, also. People were not there always. We had the place to ourselves especially in winter. They had a Methodist Church. We picked strawberries in the Spring when we came back to Norfolk.

I went to work at the Navy Yard. I had a little machine that I set up my own work. When they were laying the women off, there were eight left. I had a piece of material the size of a thimble. I made each of us a thimble and the boss, too. After that I went to work in a clothing plant in the coat department. Each piece of the coat was made separately and then put together.

When that closed down I took in children and kept them until I was past seventy years old and settled down to be a housewife.

I was baptized at fourteen years and have been going to the same Church for seventy-one years. Praise the Lord!

At the time that I was taking care of children I was getting married again. I had four children from the same family that I had kept over four years. My fiance told their Mother that we would take them if we could adopt them. She took them back. The youngest; Debbie, kept crying for me. Her Mother said we could adopt her. She is now forty-two years old and has helped me a lot, although she has been married eight years. They haven't any children, yet. I will be ninety years old in December. Praise the Lord that I can still keep house and go to Church each Sunday.

Posted by Garrett Rockey at 9:34 AM No comments: