UPDATE! (4/11/13) Special thanks to Mark Schumann for the photographs. Mark is a descendant of the Herbert family, and forwarded these photos to me. I thought they warranted a re-publish of this article, originally published on 11/5/12.

Edward H. Herbert was born on the family farm in what is now the Berkeley section of Norfolk in 1806. The Herbert family has a long history in Hampton Roads, beginning with a land grant from the King of England to George Herbert in 1650. The Herberts were shipbuilders from their earliest days in the New World, but Edward would choose a life in farming. Moving just a few miles to the east, he purchased 200 acres of the former David Murray estate in Princess Anne County and established Level Green Plantation in 1833.

Mr. Herbert would grow Level Green to nearly 600 acres over the next 25 years, and establish himself as a successful farmer in Princess Anne County. He continued to expand his property north to the banks of the Elizabeth River through additional land purchases, from present day Sunnyside Drive to Whitehurst Landing.

Mr. Herbert died on December 4, 1862. In his will, he directed his land holdings be sold upon the death of his wife Margaret (she died in 1870), and it is at this time that the land between Providence Road and the Elizabeth River is first referred to as "Woodstock Farm" in court documents.

The area near the intersection of Providence Road and Indian River Road would be known as "Herberts" for the next hundred years; but today, the once prominent family name is nowhere to be found. The Level Green neighborhood offers one of the only remaining references to this areas pre-Civil War history.

In several documents, E. H. Herbert has the title "Colonel", though I have not found evidence of a military career. Several of Edwards children were active in the Civil War, but as far as I can tell he remained a farmer during the conflict. Union troops did occupy one of his houses during the war.

There is a land survey of Mr. Herbert's entire estate at the time of his death that presumably shows the borders of Level Green Plantation, though I cannot locate this document. It does not appear to exist at the Virginia Beach courthouse, and the records previously on file in the Norfolk Circuit Court also seem to have disappeared.

There is an 1871 land survey of Woodstock Farm and "Branchville" (Avalon Terrace and Whitehurst Landing today) at the Virginia Beach Courthouse. I have superimposed the survey over a modern-day Google Maps photo of the area, to clearly show the area covered by Woodstock Farm: 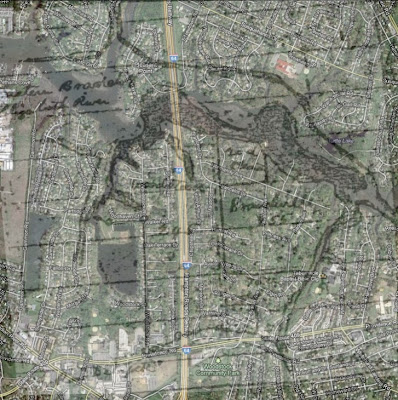 Posted with Blogsy
Posted by Garrett Rockey at 8:44 AM 12 comments: