Deed records form the backbone for much of the research found in these posts. But there is so much that a deed does not say: were these people good neighbors, well liked in the community? Were the grantors friends of the grantees, or family; or did the transaction take place between anonymous persons who never met?

I really enjoy finding connections that extend beyond mere real-estate transactions. I was gratified to learn that the Olivers, Harrisons and Steeles were not merely neighbors, but family [1]. I received similar good news when I met recently with sisters Debbie Yancey and Ruth Barrett to look through their old photo albums. Debbie and Ruth are daughters of Perry and Helen Kight and former Walker Road residents. Debbie contacted me after reading this blog to let me know that Burt and Della Hunter were her grandparents.

My first introduction to Burt and Della, beyond the 1941 deed for their property on the south side of Walker Road, was from my interview with Mary Anne Harrison Smith. Della was the neighborhood gossip who kept Mary Oliver from her chores; Burt was the Jack-Sprat-ly fellow who was falsely accused of leaving Della's undergarments on the clothes line (they had actually been pranked by the Harrison children). Thanks to Debbie and Ruth, I learned much more about Burt and Della; and they passed along some photos of Woodstock from the 1930's to the 1970's that I am pleased to share with you now. 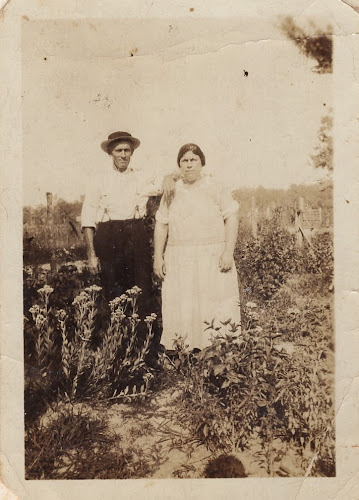 In the 1930's Burt and Della Hunter were tenant farmers on the Perdue (later Walker) farm along what is now Sterling Road. When Jesse Parkerson purchased the 150 acres of woodland along the east side of Woodstock Road in 1940, he enlisted Burt Hunter to show the 4 and 8 acre parcels to potential buyers; identifying plots and pointing out property boundaries. In exchange for his services, Mr. Parkerson conveyed a 1 acre plot along the south side of Walker Road to Burt. As a result, Burt and Della became the first homeowners on the east side of Woodstock Road. 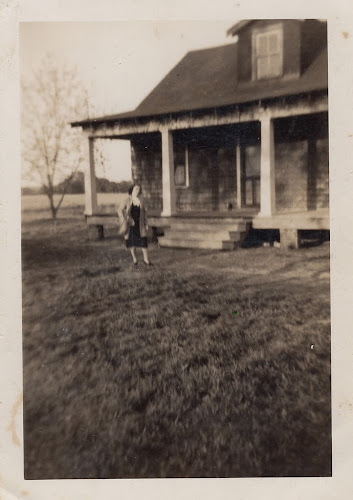 This house, located in what is now the front yard of 501 Sterling Road, was first made known to me as the Perdue home from the 1920's. Burt and Della occupied this home as tenants of the "Walker house" (as it came to be known) in the 1930's. That's Burt and Della's daughter, Helen Kight. That's the river on the other side of the house. 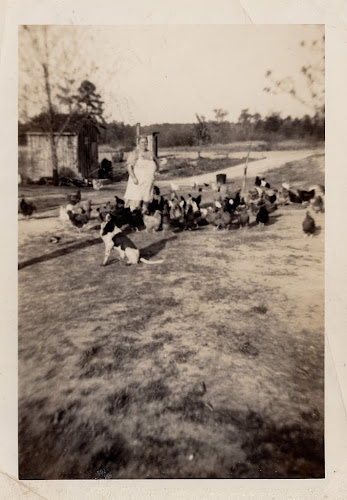 Della, tending chickens on the Walker farm, pre-1941. She is probably standing about where 512 Sterling Road is now, and we are looking southwest, toward where Sterling Court is today. 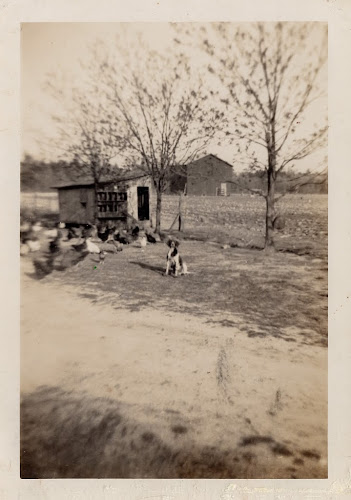 That barn is behind what is now 524 Sterling Road, in the east-bound lane of I-64. Burt and Della were the last tenants to farm the land along Sterling Road. Subsequent owners kept cows and horses until the mid-1960's. 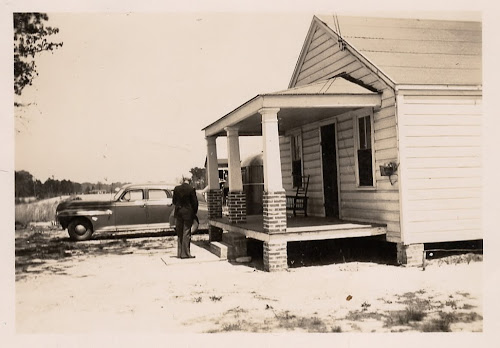 The Hunters' new home after 1941, at the corner of Woodstock and Walker Roads. The house was of modest rural construction, with some of the roof joists still covered in tree bark. Bathroom facilities were outside. The house was torn down in the mid-1970's, and today that plot of ground is 5881 Walker Road.

I date this photo prior to 1945 because the Jimmy Steele house (now 568 Woodstock Road) doesn't appear to have been built yet. It should be on the other side of the car. The farm beyond is the Oliver farm at this time, or the 500 block of Woodstock Road today. 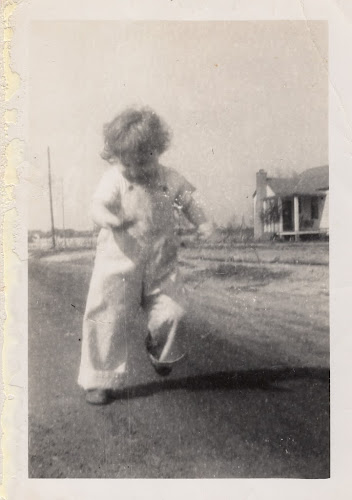 This is Helen "Snookie" Kight (elder sister of Debbie and Ruth, daughter of Perry and Helen Kight). If we take a guess at her age (I'll say 3?) then this picture is ca. 1946. That is the Jimmy Steele house to the right, and the former Oliver farm beyond. The Olivers (in their late-60's by this time) sold their farm the year before and bought Jimmy Steele's house. 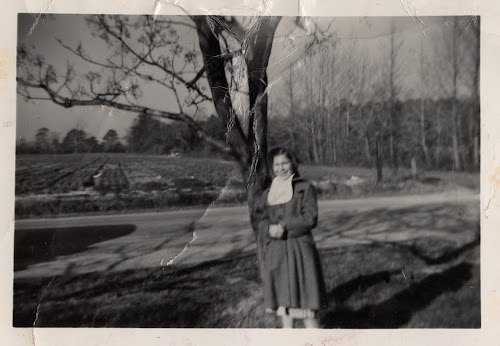 Snookie again, with Woodstock Road behind her and the former Hastings farm on the other side of the road (E.V. Williams Construction owned it at the time this picture was taken; ca. 1958). During the E.V. Williams years, this property was used as a borrow pit and a trash dump. Today the land in view here is 613 Woodstock Road, Woodstock Cove Park, and a lake. 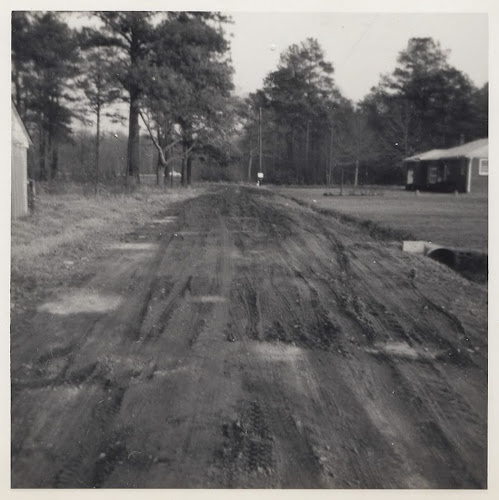 Walker Road, ca. 1970. Note the vehicle travelling on I-64 in the distance. The Kight house is on the right, occupying the eastern half of the Hunter property. The Kight house was demolished in 2011 and 4 brand new homes occupy that land today. 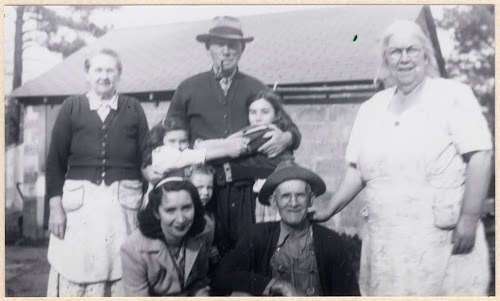 Neighbors: Mary and John Oliver, with John surrounded by his grandchildren, Mary Craddock (on his left) Joan Craddock (on his right) and an unidentified little one in front of him; The Olivers' daughter Elsie Craddock is front row left, with Burt and Della Hunter on the right. That structure in the background is the garage for the Jimmy Steele house, which still faces Walker road today.

ENDNOTES:[1] I may be making references that newer readers are not familiar with. For a good overview of Woodstock's history, including notable names and dates, see my PowerPoint presentation.

Posted with Blogsy
Posted by Garrett Rockey at 9:02 AM No comments: