While Pheby Richards holds the title of Woodstock's first resident, it was Jesse J. Parkerson who transitioned much of Woodstock from woodland to neighborhood during World War II. From the mid-nineteenth century until 1940, most of the property east of Woodstock Road was just that -- wood stock; 150 acres of timberland [1]. Raymond DeFrees purchased this land from his brother-in-law Emmet Don Sheets in 1929, but lost the property to foreclosure during the economic turmoil of the 1930's [2]. Jesse J. Parkerson, a real-estate investor and president of the Merchants and Planters bank purchased the property out of foreclosure. He parceled it up into 4 and 8 acre lots which were then sold off over the next 8 years [3].

Parkerson called upon Burt Hunter, a tenant farmer who had been living in Woodstock for nearly 10 years, to meet with potential buyers and show property boundaries. In trade for his services, Mr. Parkerson conveyed a 1 acre plot of land at the corner of Woodstock and Walker Road to Burt and his wife Della.

The following is an excerpt from the 1959 book, The History of Lower Tidewater Virginia: 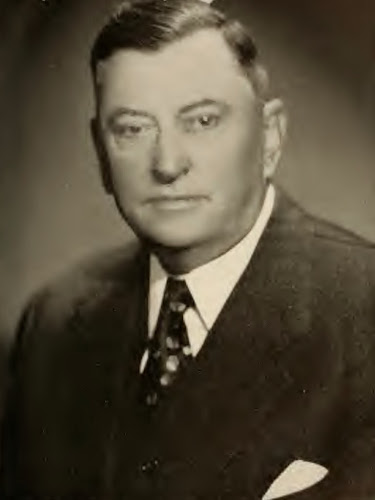 JESSE J. PARKERSON—Since 1929, Jesse J. Parkerson has been president of the Merchants and Planters Bank of Norfolk, and his experience in his profession dates from the early years of the century. He joined the staff of the bank in 1902 and has played a conspicuous part in its growth. Not only as a banker but as a progressive citizen and promoter of civic causes, he has proved his value to the area.

Born July 23, 1884, in Berkley, Virginia, now a part of the city of Norfolk, he is a son of the late W. T. J. and Cherry (Martin) Parkerson. After attending public and private schools and a business college, he began his career in Berkley as a runner for the Merchants and Planters Bank on January 2, 1902. Advancing through the positions of bookkeeper and teller, he was made cashier on December 31, 1909, and was elected president on January 16, 1929.

The Merchants and Planters Bank was the first financial institution to be established in that part of the city which lies across the eastern branch of the Elizabeth River. It opened its doors April 1, 1900. Founded through the efforts of Alvah H. Martin, Sr., and other progressive citizens, it began its existence with a capital of thirty thousand dollars. Foster Black was its first president, and he was succeeded by Alvah H. Martin, who saw the bank's capital increased to fifty thousand dollars. Following the death of Mr. Martin on July 5, 1918, Colonel S. L. Slover became its executive head. During his tenure of office, two branches were opened: the Campostella Branch, at Campostella Road and Springfield Avenue in 1924, and the South Norfolk Branch, Twenty-second and Liberty Avenue, in 1927.

Active in other business connections as well, Mr. Parkerson is treasurer and a director of the Chesapeake Building Association, and a director of the Security Insurance Agency, Inc. He is president and director of the South Norfolk Bridge Commission, a director of the Norfolk Chamber of Commerce, and a member of the Virginia State Chamber of Commerce, and as a bank executive, belongs to the Virginia Bankers Association and the American Bankers Association. In his own city he is a member of the Norfolk Executives Club, the Norfolk Yacht and Country Club, and Doric Lodge No. 44, Ancient Free and Accepted Masons. In Masonry he is a member of the higher bodies including the Ionic Chapter of Royal Arch Masons. In civic and philanthropic fields, he serves on the board of directors of the Central Young Men's Christian Association, as treasurer of the Norfolk area of the Virginia Society for Crippled Children, as a member of the lay board of the DePaul Hospital, and of the Pension Bureau of the city of Norfolk. He has been active in the Norfolk Community Chest fund campaigns; and during the World War II period, did outstanding work for the Norfolk War Finance Committee on behalf of the United States Treasury Department. A communicant of the Memorial Methodist Church of Berkley, he formerly served on its board of stewards and as treasurer.

On October 31, 1906, Jesse J. Parkerson married Emma Clark Markham of Elizabeth City, North Carolina, daughter of the late James C. and Emiline (Purdy) Markham, both of whom were born in North Carolina. Mr. and Mrs. Parkerson are the parents of one daughter, Lois, a graduate of Randolph-Macon College at Lynchburg, Virginia. She married William E. Warren of Norfolk. Mr. Warren is vice president and director of the Merchants and Planters Bank of Norfolk, and is in charge of its Lafayette Boulevard Branch. Mr. and Mrs. Warren are the parents of one daughter, Ann Parkerson Warren. Mr. and Mrs. Parkerson make their home at 944 Larchmont Crescent, Norfolk. [4]

[1] Woodstock's development can be broken down into 3 regions: north Woodstock, bordered by Walker Road, I-64 and the river was the first plot of Woodstock proper to have a residence. West Woodstock was not part of Edward Herbert's Woodstock, but was grafted in over time. East Woodstock, spoken of here, originally included the land between Woodstock Road and present day Rodney Lane, if Rodney Lane were extended from Providence Road to the river.
[2] The DeFrees family would keep their primary residence through the 1950's -- a dairy farm located at the historic Francis Land house on present-day Virginia Beach Blvd.
[3] Lot 17 was the exception, weighing in at about 43 acres. Frederick L. Hood purchased this land from Mr. Parkerson in May, 1942. The land was later purchased by Silas Harrison, brother of Walter Harrison (who lived on what is now the Woodstock Cove subdivision from 1934-1951). Silas' widow Mildred Harrison sold the land to developers in the mid-1960's, and it is now part of the Avalon Terrace subdivision.
[4] Wichard, Rogers Dey; History of Lower Tidewater Virginia, Vol. 3, p. 22 Lewis Historical Publishing Co. Inc., New York, NY 1959
[5] Photo source: http://www.cityofchesapeake.net/Assets/documents/departments/public_works/jordan-bridge-assessment/2008-08-19-Jordan-Bridge-photo-gallery.ppt?

Posted with Blogsy
Posted by Garrett Rockey at 10:45 AM No comments: