Before There Was Kemps Landing School

Today I found the Sargeant Memorial Room at the Norfolk Public Library. If you read any books on local history, there is a very good chance that several of the photos will have "Courtesy of the Sargeant Memorial Collection" noted somewhere nearby. I asked about their Princess Anne County photo collection, and the guy at the desk pulled four file folders out of a drawer and handed them to me! I spent the next 30 minutes or so sifting through old photos.

The Virginia Beach Public Schools website has a short history of the old Kempsville Elementary and it seems to indicate that the building that eventually came to be known as Kemps Landing, built in 1941, was the original Kempsville Elementary. But what about the pretty white columns? Mary Ann did say that her old school was torn down; so did they tear down a previous school with white columns when they built Kemps Landing? But if that is the case, it would have been torn down before Mary Ann was old enough to attend.

This is when the Sargeant Memorial Collection clarified everything for me:

There is an inscription on the back of this photo, "Kempsville Grammar and High School; 10-7-31". YES! There are COLUMNS! In fact, there are two buildings here, side by side, and they both have columns. Which one is the grammar school? Which one is the high school? The photo doesn't specify.

This is a photo of the building on the far left in the first photo. This photo is inscribed, "Kempsville Grammar and High; 10-9-31". Not much clarification there, but I did notice something: take careful note of the windows on the left...

Here is the building we are all familiar with, because it still exists today. The photo is inscribed, "Kempsville High School; 5-14-42". My generation knows it as Kemps Landing (not the magnet school; before the magnet school); but whatever you call it, there it is. Now, please note the building to the right of the new high school: see the windows? It looks like they did not tear down the old schools when they built the new one.

This photo has been floating around the Internet for a couple of years now, but I saw it most recently in a Facebook post: 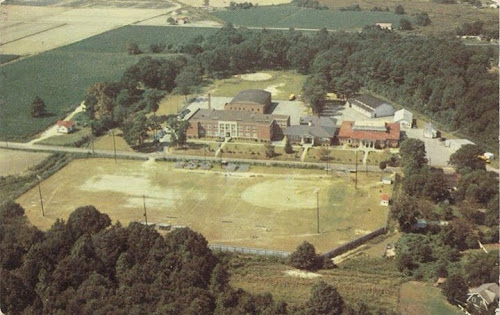 It is a postcard of Kempsville High School, but there is no date. I was always under the impression that the two buildings to the right were the old jail and a municipal building -- but it is crystal clear now that all three buildings are school buildings. The two buildings on the right are the buildings in the photographs above.

With just a little more research, I found this photo on the Virginia Beach Public Library website: 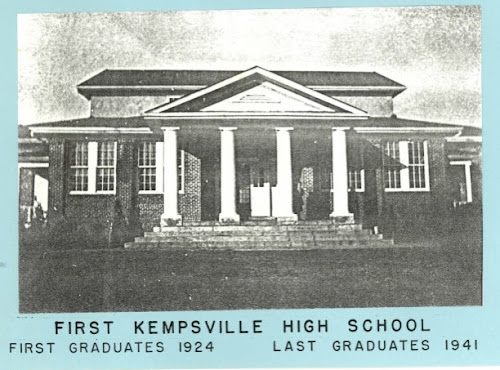 Now we know which building was the grammar school and which was the high school! The last graduating class was in 1941, and the doors opened at the new high school later that year.

For the record, the grammar school is the oldest building here, constructed in 1910. Both the grammar school and the old high school would be demolished prior to 1953 to make room for a one-story addition to the new building. That addition survived until very recently, when it was torn down to accommodate the re-routing of Princess Anne Road.

While on the subject of additions, I noticed one more thing while studying these photos. Those of us who have lived in Kempsville for any length of time know about the one-story addition to the Kempsville High/Kemps Landing building; but these photos show that was not the first addition that was made: 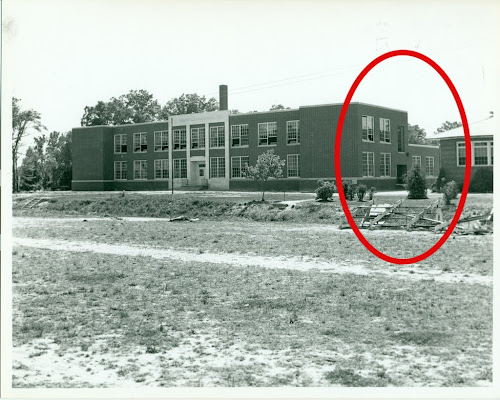 The wall that faces the grammar school is the northernmost edge of the building in this 1942 photo. 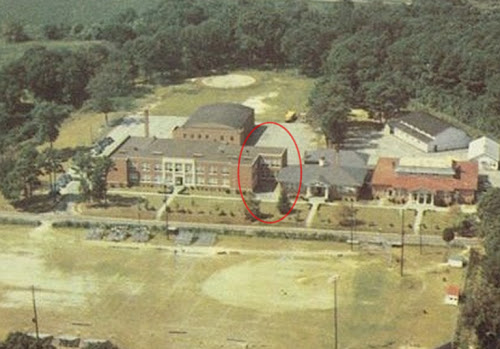 By the time this picture was taken (before 1953) a new wing has appeared on the northwest corner of the building. That addition is still there.

Posted with Blogsy
Posted by Garrett Rockey at 5:21 PM